Is it worth having a dedicated French website for France and if so, does that one website cover all other French-speaking markets? The answer is a clear yes to the French website and no to global coverage. France is a major economy that merits its own dedicated website to showcase your company and drive sales. But the website built for the French market is just not relevant for reaching your Quebecois or West African target customers. French is the 6th most widely spoken language in the world but like most aspects of the worldwide web, it is being relevant to the local market – localization – that gets your company found, understood and doing business globally.

France is one of the largest economies in the world and French one of the most spoken languages, so it’s no wonder that so many companies looking to export globally opt for a French website. But the French spoken in France is dramatically different to that spoken in Quebec or in West Africa. This blog explains why your French website is not relevant to your other French-speaking business targets and sets out some tips on where and how to get you started on building sales, brands and business in the French-speaking world.

Countries with French as official language

The largest French speaking country is the Democratic Republic of Congo, followed by France and Canada:

In terms of GDP, the two giants of the Francophone world are France and Canada. At just under $3 trillion, the French economy ranks 6th in the world. But France is also the world’s 5th largest importer, counting the USA as a major trade partner. A website for France can also radiate out to neighboring Francophone markets like Belgium and Switzerland. While the GDP of Quebec is under US$500 million, the Province punches above its weight in trade terms given its proximity to the USA. 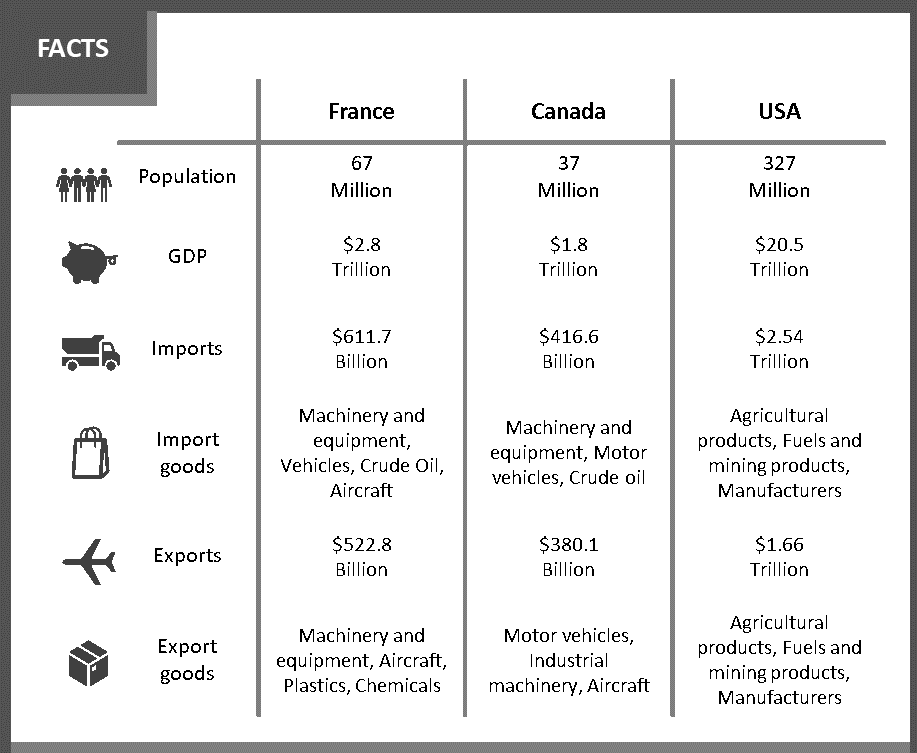 Grammar and syntax typically add 20% to your French translation: an important aspect when considering website layout and design. Degree of formality is another aspect that can affect your user experience. The French are more formal, typically using the formal ‘vous’ rather than familiar ‘tu’ to address people. Equally, business relationships typically keep to last names basis longer than their U.S. counterparts and written French in particular is more formulaic than English. All these aspects mean that a simple website translation will not be enough: an experienced native French approach is necessary to build websites that foster the trust needed for the buyer’s journey.

French in France versus in Canada

Quebecois’ origins lie in the French spoken over 400 years ago and today is influenced by Canadian English as well. Canadian French therefore incorporates numerous anglicisms as well language specific to Quebecois history and culture. The list of differences with Metropolitan French is long, from everyday words (‘char’ and ‘auto’ rather than ‘voiture’) to Canada-specific terms (‘poutine’ and ‘tuque’).

What terms and words will your business prospects use to find you? Making sure your keyword research is up to date and spot on is essential for being found and understood in your target market. Keyword differences are another reason why it is vital to have dedicated websites, localized for each market to be found and understood by your prospects.

Besides differences in grammar and vocabulary, the pronunciation between both French variations is different. While French people pronounce the ‘r’ in a flapped way, the Canadians pronounce it with a uvular sound. Another difference is the way the letters D and T are pronounced in Quebec French. The letters are pronounced as ‘DZ’ and ‘TS’ when these occur before a ‘u’ and ‘i’. 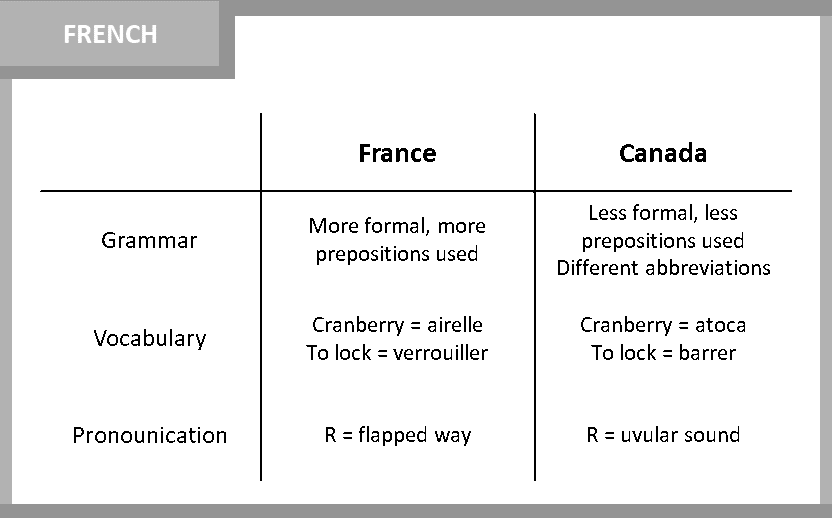