The land grab for internet users in India is in full swing and nowhere more so than in ecommerce. India now has the second largest number of internet users in the world, behind China, but this still means that about 65% of India’s population is not yet on the internet. While there are many Indian tech companies there are surprisingly few independent internet players, leaving the field open to the internet giants of the world. Google, with a historically impenetrable 96% market share in India, is facing serious competition from Chinese search engine giant Baidu. Amazon and Alibaba are dividing up online retail, gobbling up homegrown talent while Uber, Facebook and others all look for a slice of the cake.

There are several big growth drivers propelling ecommerce in India. These include: a young population – in fact the largest millennial group in the world as 2/3 of the population is under 35; a growing middle class, improved albeit insufficient internet connectivity and high demand for smartphones. All this translates into the fastest rate of growth for ecommerce of any major market in the world. According to the Internet and Mobile Association of India (IAMAI), ecommerce activity increased by over 50% in 2015 and is now estimated to be worth over $38 billion. This is still tiny however, compared to the size of the market, representing just 2% of all retail sales. Nevertheless it is a huge leap from the estimated $3 billion ecommerce registered in 2011. Significantly, the festival of Dussehra in October 2016 – an Indian shopping equivalent of Black Friday or Singles Day, broke all records for ecommerce with FlipKart announcing that it sold over 15 million items over the 5-day festival.

Ecommerce in India has a distinctly Indian flavour

The country is often described as a kaleidoscope, reflecting its geographic, economic, cultural, social and linguistic variety. This heterogeneousness is a challenge for ecommerce at several levels. For example, India has a notoriously complex tax structure leading to double taxing of some ecommerce transactions. The government’s Goods and Services Tax (GST) initiative is supposed to simplify this when finally implemented in 2017. Logistics in India can be nightmarish: just think of the 1.5 million post offices run by India Post. Payment has also been a problem for ecommerce. The favoured payment method remains Cash on Delivery (COD) although digital payments are gaining momentum, boosted by mobile phone uptake: about 65% of all ecommerce sales in India are now generated via mobile devices. Further, government initiatives to ‘demonetize’ the economy have proven problematic although extending banking services to citizens and launching a Unified Payments Interface (UPI) means that ecommerce companies can collect payment electronically even for COD.

The lure of the potential Indian market, has meant that ecommerce companies are investing and finding solutions themselves. This makes India one of the most interesting ecommerce markets to follow as the private sector finds commercial responses to practical problems. 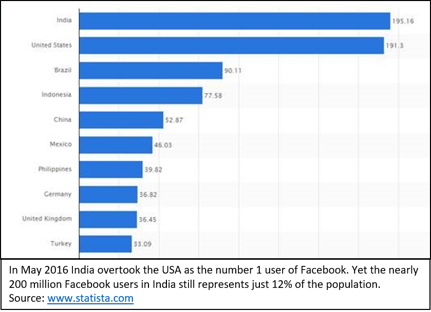 Amazon got burnt in China. Today its market share is tiny and it has had to negotiate with Chinese leader Alibaba to share platforms or delivery channels. Amazon launched in India in 2013 and has already pledged $5billion of investments to ensure a solid market share. Amazon CEO Jeff Bezos says he expects India to be the group’s second largest market after the USA. Amit Agarwal, head of Amazon India goes further: “We want to transform how India buys and sells”. The investments appear to be paying off: in July 2016, the US group overtook home-grown FlipKart as the number one ecommerce platform with gross merchandise value (GMV) of $300 million per month.

To deal with the specific challenges of ecommerce in India, Amazon is rolling out its own logistics platforms, investing in innovative payment methods, extending loans to small companies and shaping a uniquely Indian business model. This is also a reflection of compliance: Indian regulation bars ecommerce companies from owning stock or inventory. This means Amazon’s model in India, like domestic ecommerce champions, FlipKart and SnapDeal, look more like marketplaces, closer to Alibaba in China.

Price is not enough

Like any marketplace, Indian ecommerce is highly price sensitive. This acts as further incentive to ecommerce companies to distinguish themselves through services. Delivery and payments methods are the biggest differentiators. The Indian firm Paytm, backed by Ant Financial (Alipay, part of Alibaba) provides digital wallets and boasts over 120 million users – nearly 6 times the number of credit cards in use in India – while Amazon helps its small business clients get bank financing and loans. Ecommerce companies active in India today look more to the Alipay model in China than the US or European examples. Alipay facilitates cash on delivery by withholding payment under goods delivered. It also offers short term loans to its clients as well as help with global logistics and customs.

The Chinese ecommerce market grew 6-fold between 2011 and 2015 and is now the largest in the world. Many of the global tech giants, and notably Amazon and Alibaba, believe that the Indian market could be as dynamic as China and that the time to carve out market share is now. This has arguably made life harder for the home-grown competitors who don’t always have such deep pockets, although many of the Indian champions are also backed by international investors, including the tech giants. Over the next 2 to 3 years, the fast-evolving Indian market is set to be the battle ground for the internet global giants as well as home-grown champions. What is already clear is that it will help determine how to do business in India.