How Many English-language Websites Do You Need? 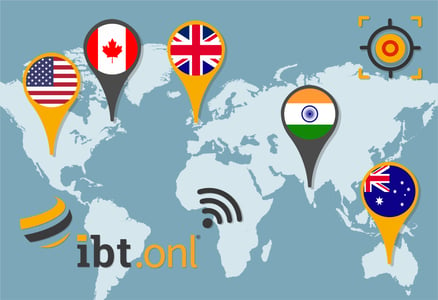 A rose is a rose is a rose – except when it’s not. English is the most widely spoken language in the world, especially for business. So it might make sense to have just one English website for all English speakers. But in the online world, detail matters. Different English dialects use different keywords and getting the right keyword is essential to being found, understood and doing business globally. Some 63 countries claim English as a national language but having one English-language website will not give you instant access to those 1.5 billion English speakers. But the good news is that you don’t have to build 63 distinct English-language websites. In practice, regions can be grouped together and with some sharp proof-reading and keyword optimization for the local market, content can be re-used for multiple regions. In this blog, we look at some of the larger English-speaking regions and their distinct online linguistic profiles.

Over 1.5 billion people claim to speak English, with 375 million of them having English as their mother-tongue. This makes English by far the most spoken language worldwide. This doesn’t even count all those who can speak enough English to “get by” at a business meeting. English is truly the ‘lingua franca’ for business and therefore for global trade. Any company with ambitions to export has to have a plan for English and notably when to roll out their English-language website.

But what about companies from English-speaking countries? Do U.S. companies with an English-language website need to have a separate website for Australia? What about British companies? Can their Canadian prospects find and engage with them online easily? The answer is that English-speaking companies need to be mindful that there are many versions of English and the essential keywords used may differ from one Anglophone country to another.

Here is a diagram showing countries with English as their official language by continent:

Countries with English as official language 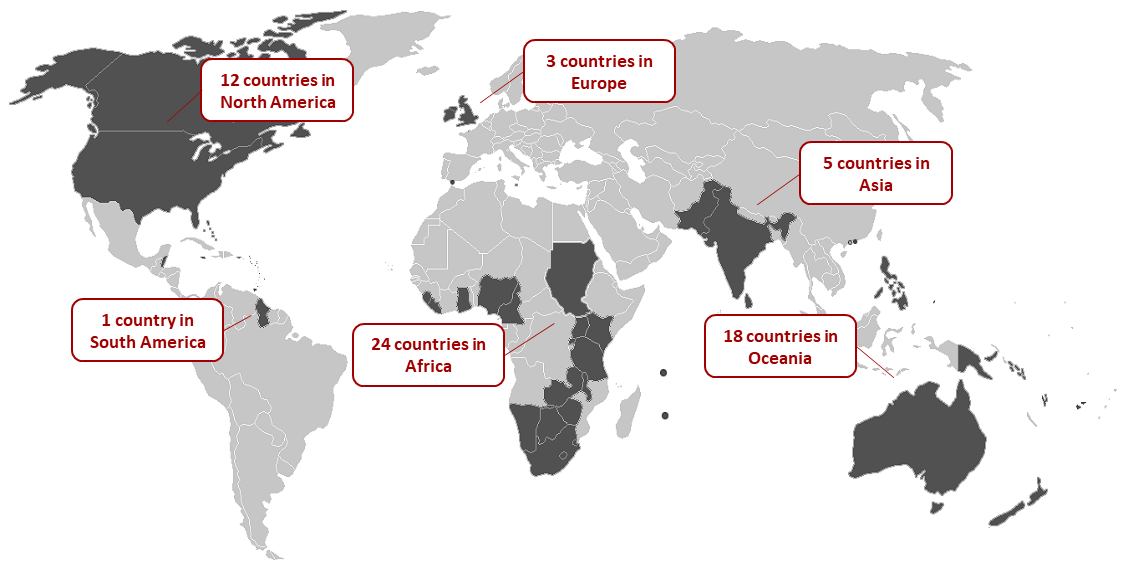 Over 63 countries claim English as an official language. However, in reality, English is the de facto official language in just 5 countries: Australia, Canada, New Zealand, the United Kingdom and the United States. The other countries have English as an official language by law but not necessarily used by the majority of their population or as a first language. But the English used in all these countries varies in pronunciation, grammar, vocabulary and colloquialisms. More than 1000 different “English” accents exist around the globe: American English, Australian English, British English or Canadian English, just to name a few! Let’s have a deeper look at the four most common dialects of English.

The United States is the largest English-speaking nation. With 225 million native speakers and 25.6 million second language speakers, the U.S. is an obvious market to start with if you are planning to go global in English. Besides the United States, so-called American English is widely used in Canada, Latin America and East Asia. Note however, that even in markets dominated by American-English, keywords vary. And without the right local keywords, your website is not optimized for the local search engine.

British English has more than 59 million native English speakers within the United Kingdom. It is significantly different to the English of the United States, particularly noticeable in pronunciation, spelling, vocabulary and grammar.

Even though most words are the same in both types of English, some words are completely different. While you can order a cookie in the US, you should probably ask for a biscuit for your afternoon tea in the United Kingdom. More confusing is when a one word exists in both types of English but has a different meaning in each. The word ‘chips’ can describe two different side dishes and if a British person talks about the ongoing football season, he is probably not talking about American football.

When it comes to spelling the main differences between American and British English are the use of ‘s’ and ‘z’ as in globalisation/globalization, the ‘re’ and ‘er’ in centre/center or ‘ou’ and ‘o’ as in colour/color. Besides that, differences in grammar appear between British and American English. Especially, when it comes to the past tense the grammar can deviate.

British English is the more dominant version for the rest of Europe, African countries and South Asia.

Differences in American and British English 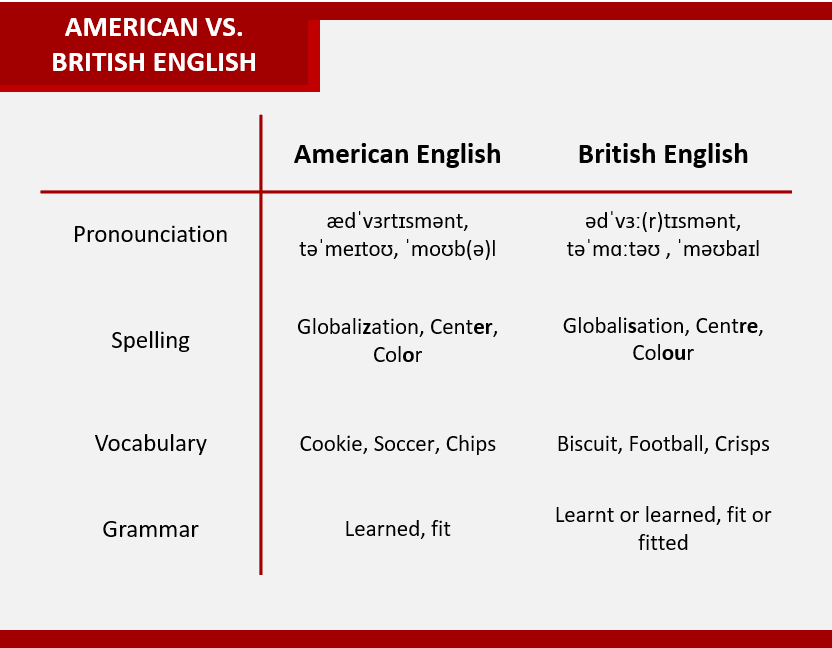 Canadian English is spoken by about 19 million native speakers and 28 million people using English as their main language in Canada. When it comes to the pronunciation, Canadian English sounds similar to the U.S. English but combines British and U.S. English in the written form. Attention to keyword research for your website has to be fine-tuned as the differences can be subtle but essential.

All companies looking to export internationally need to have a plan for rolling out English-language websites. Even U.S. and British companies. The English-language website from a U.S. company, may not have the right keywords, grammar, style to be effective in other English-speaking regions. Don’t assume that just because your website is in English, the 1.5 billion English-speakers in the world can find you. Most likely they can’t.

The subtle but essential differences in the keywords used by your prospective buyers to find you in different markets, need to be localized – that is, customized to the local market, even if that market speaks English. Terms vary. The words locals use to search for your goods and services, varies. Beyond this keyword optimization, localizing your website to reflect the target export market brings the trust and knowledge needed for your buyer’s journey. Your Australian prospective client can surely read your U.S. website content but will also recognize that the website was not targetted at them. Grammar, colloquialisms, measurements and currencies, as well as using local examples, all play their part in building confidence, brand recognition and good reputation that make for sustainable export growth.