Arabic is one of the world’s major trade languages. Combine that with the dominance of the internet in many Arab-speaking countries and it’s clear that companies need Arab language websites to get found, be understood and do business across the Arabic speaking markets. In countries like Saudi Arabia and the United Arab Emirates, over 90% of the population access the internet regularly. Social media and ecommerce are well developed. In fact, Saudi Arabia is one of the biggest online spenders worldwide. So getting your Arab website right is vital for your company’s success in these markets.

But what should that Arab-language website look like? Do you need one Arabic website for all Arabic speaking countries? What are the main differences with your English-language website? How about search engine optimization and keyword research for online Arabic? This blog shares some of our experiences building and managing corporate websites and social media marketing for Arab-speaking countries, but if you want more information, just get in touch!

Let’s start with the Arabic language

With 310 million native speakers and 270 million second language speakers, Arabic is one of the most spoken languages in the world and belongs to the top 4 global trade languages. In all, the Arabic speaking world is made up of 25 countries in Africa and Asia. 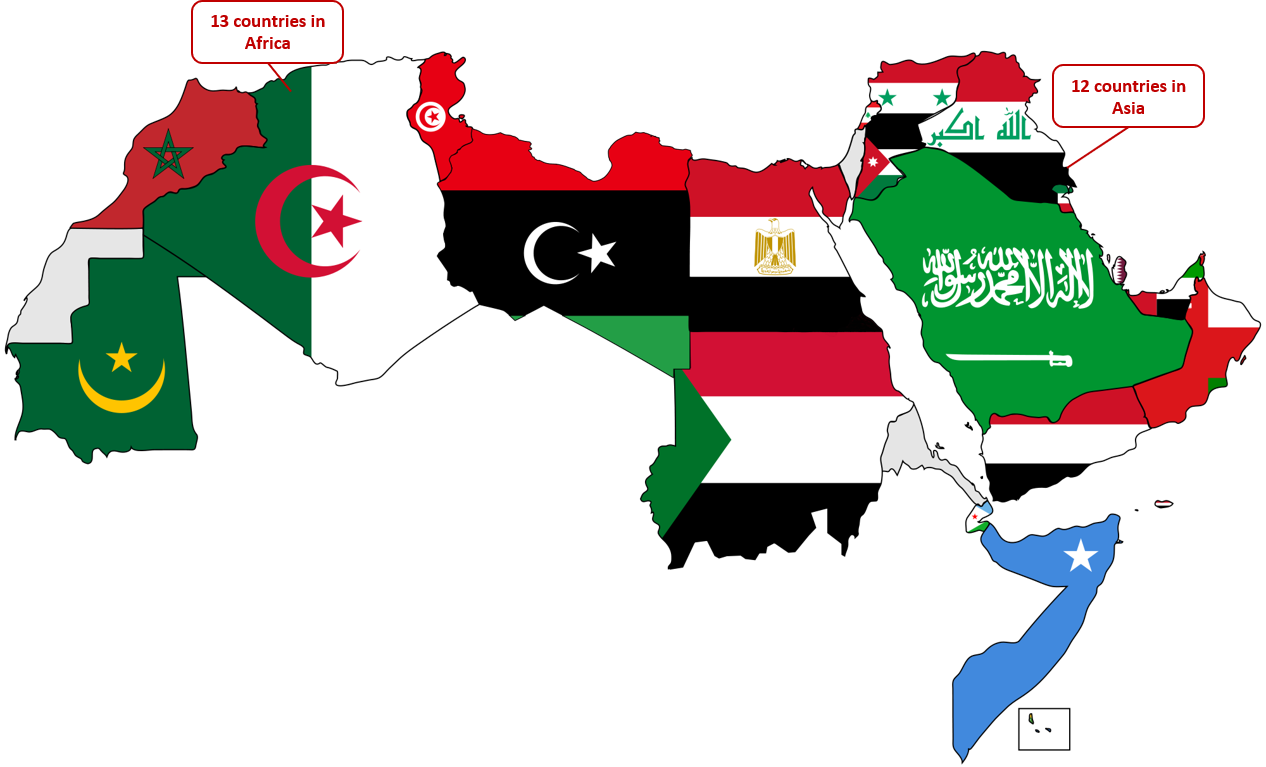 *Measured by GDP (nominal) per capita

Differences between Arabic and English

These facts make the Arabic market attractive for global exporters. The quickest and most cost-efficient way to do business in the Arabic speaking world is to get online with your Arabic website. But what do you need to know before taking your English language website to the Arabic market?

English and Arabic are VERY different. Language specialists use the concept of Linguistic Distance (LD) to measure the difference between two languages, with a range of 0 (no difference) to 1 (all different). English speakers struggle a lot when learning Arabic. That results in a high LD of 0.67 from English to Arabic, comparable to the LD between English and Chinese. In contrast, the Linguistic Distance between English and French is only 0.4.

One of the main linguistic difference is the characters. While the English language uses the Latin Alphabet, the Arabic language applies Abjad. But that is not the only major difference. Arabic is one of the few languages which is read from right to left. That is an important fact to know when creating your website layout.

In terms of grammar and sentence structure, Arabic uses more nouns rather than long sentences with pronouns and verbs. Again, this will affect your layout as the content is likely to be shorter if you are translating from English to Arabic.

Reaching more than 270 million people with just one language is appealing to any exporter. But the Arabic spoken in one country is not necessarily the same as a neighboring Arab country. About 30 modern varieties of the Arabic language exist today. Besides country-specific dialects, such as Algerian Saharan Arabic, Gulf Arabic or Egyptian Arabic, a standard version exists. The so-called Modern Standard Arabic (MSA) is a formalized Arabic which can be understood throughout the Arab speaking world. Besides being the most widely used version of Arabic, it is also the version most used by the media, such as TV and newspapers, as well as websites.

But there remain huge differences in grammar, vocabulary and pronunciation between MSA and local Arabic dialects. Modern words are especially prone to regional differences, even common terms such as mobile phone:

This has major implications for keyword research and search engine optimization. Your website needs to target the market with your highest priority clients and prospects so choosing the right keyword is important.

Take advantage of social media and ecommerce in the Arab world

A study by PwC concluded that customers in the Middle East are more technologically advanced when compared to the global average, most notably for shopping online, paying via their mobiles and using social media for search. The intertwining of social media and ecommerce is underlined in the report which found that “38% of Middle East consumers that were surveyed said they use social media to buy products, compared to 21% of consumers globally”.

Ecommerce is highly developed throughout most of the Middle East, with growth at +25-30 % per annum, far ahead of global averages. Ecommerce is expected to top US$28.5 billion by 2022, according to a new research by Bain & Company and Google. The most developed markets include the UAE, where the government is committed to expanding e-commerce, launching its Dubai CommerCity scheme - a free zone for e-commerce in the Middle East and North Africa region.

Ecommerce in the UAE and Saudi Arabia 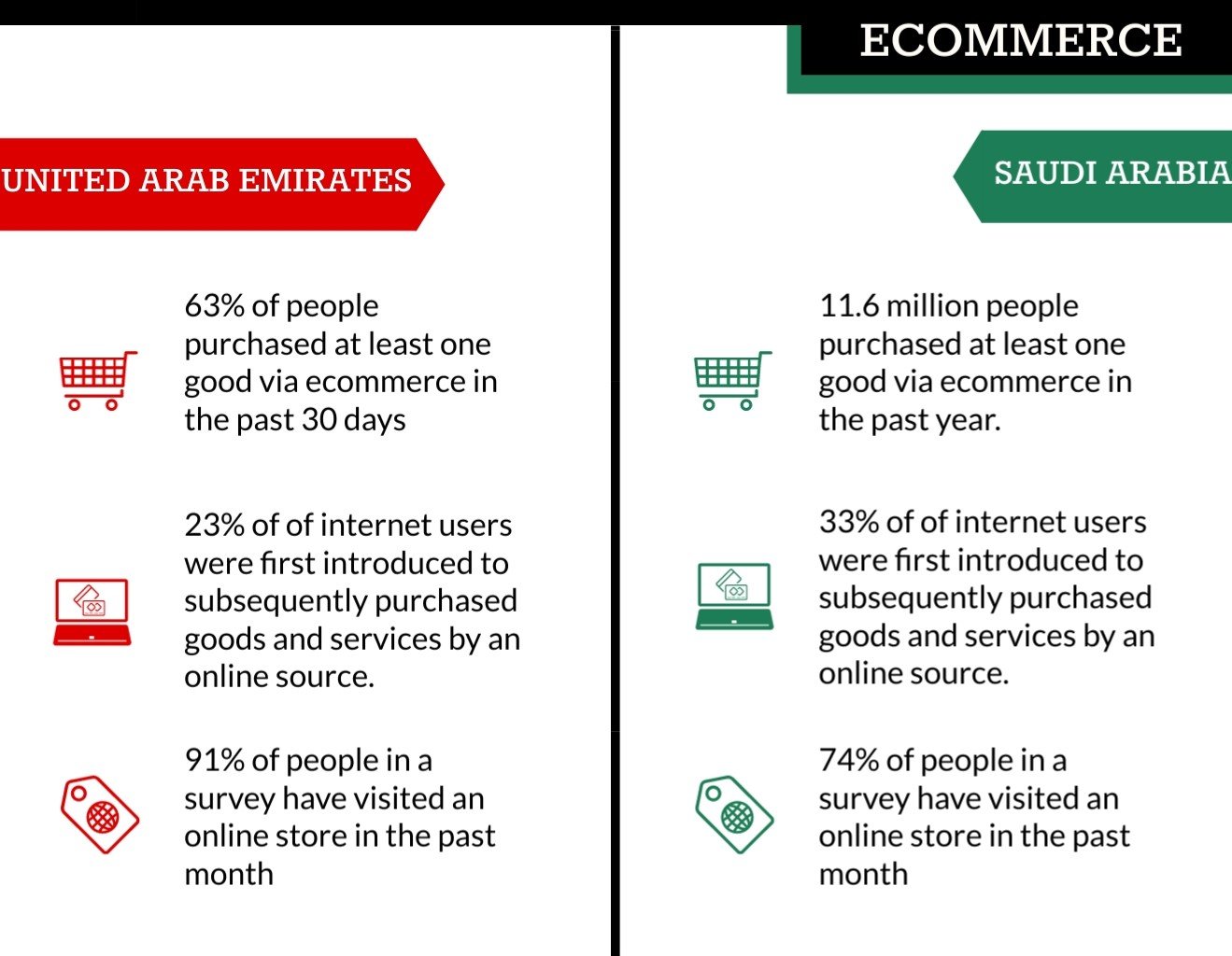 What else do you need to know?

We hope this blog answers some of your questions on Arab-language websites but if you would like to learn more or discuss any aspect, get in touch! We are always here to help.