European ecommerce - get in on the act?

With Christmas fast approaching, several reports have just been published reviewing the role of ecommerce, cross border shopping and the importance of country specific websites for North American and European exporters. All the reports point to the same conclusion: ecommerce is now mainstream and if your websites are not fully prepared, you are unlikely to get the full benefit of the Christmas shopping binge. So for exporters, how do you make sure your websites will perform optimally across multiple markets? Here are a few pointers.

Ecommerce – a fact of life

The first step is to recognize that ecommerce deserves as much of your attention as traditional retail. While some countries are further down the path, ecommerce is now a vital channel across all developed economies. The Nordic Christmas Report from Klarna claims that more than 80% of Nordic consumers expect to shop online this Christmas, equating to over one fifth of all purchases being made in the run-up to Christmas. A similar pattern is reflected in many northern European economies as well as in the US and Canadian markets.

Mobile shopping (mcommerce) is also becoming mainstream. Indeed the Adobe Digital Index forecast for Christmas 2015 records that, for the first time, mobile devices overtook desktops on Thanksgiving Day for online shopping in the US. In the run-up to Christmas, the report estimates that 20% of consumers in the US will do their Christmas online shopping via their smartphones. The European average is not far off although there is a north-south divide with the most mobile shoppers in Northern Europe, led by Norway (25%), the UK (23%) and Sweden (22%).

One of the most important features of this Christmas ecommerce season is the growth of cross border shopping. This is a particularly strong European feature and we increasingly direct websites according to countries’ spheres of influence rather than limited to national borders. The E-barometer Q3 2015 issued by PostNord, Svensk Digital Handel and HUI Research, shows that almost a quarter of all online sales in Sweden occurs at foreign online stores, notably British, US, German and Chinese websites. Cross border ecommerce is opening up tantalizing opportunities for nimble exporting companies. The investments made for the German market, for example, can now extend not just to the obvious German-speaking neighboring markets, but even to Scandinavians and central Europeans. But cross border ecommerce also poses particular challenges to ecommerce, for example for search engine optimization. We will be addressing this in an upcoming blog. So stay tuned!

Ecommerce – a must-have for exporters

Across Europe, ecommerce continues to increase by double digit figures - for example, online sales in the Netherlands are up 20% in Sept 2015 year–on-year according to the Dutch statistics agency CBS. While it is meaningless to make generalisations about a phenomenon that is still growing and evolving so fast, there are clear characteristics for ecommerce that are evident from Mexico to Northern Sweden: it is mobile and cross-border, ensuring that ecommerce is an increasingly must-have retail channel across multiple markets for all ambitious exporters.

In conclusion, if you want to participate in the global ecommerce gold rush, let us help you get your websites optimized for multiple markets. Get in touch. 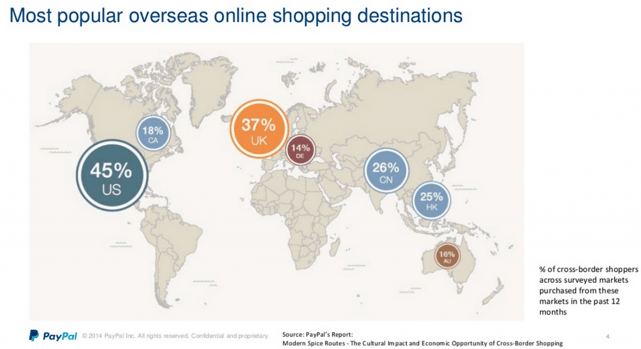